VoltDB achieves scalability by creating a tightly bound network of servers that distribute both data and processing. When you configure and manage your own server hardware, you can ensure that the cluster resides on a single network switch, guaranteeing the best network connection between nodes and reducing the possibility of network faults interfering with communication.

However, there are situations where this is not the case. For example, if you run VoltDB "in the cloud", you may not control or even know what is the physical configuration of your cluster.

The danger is that a network fault — between switches, for example — can interrupt communication between nodes in the cluster. The server nodes continue to run, and may even be able to communicate with others nodes on their side of the fault, but cannot "see" the rest of the cluster. In fact, both halves of the cluster think that the other half has failed. This condition is known as a network partition.

When you run a VoltDB cluster without availability (in other words, no K-safety) the danger of a network partition is simple: loss of the database. Any node failure makes the cluster incomplete and the database will stop, You will need to reestablish network communications, restart VoltDB, and restore the database from the last snapshot.

However, if you are running a cluster with K-safety, it is possible that when a network partition occurs, the two separate segments of the cluster might have enough partitions each to continue running, each thinking the other group of nodes has failed.

For example, if you have a 3 node cluster with 2 sites per node, and a K-safety value of 2, each node is a separate, self-sustaining copy of the database, as shown in Figure 10.2, “Network Partition”. If a network partition separates nodes A and B from node C, each segment has sufficient partitions remaining to sustain the database. Nodes A and B think node C has failed; node C thinks that nodes A and B have failed. 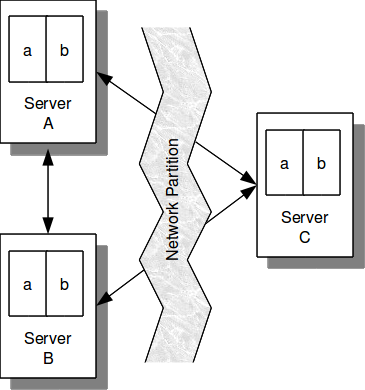 The problem is that you never want two separate copies of the database continuing to operate and accepting requests thinking they are the only viable copy. If the cluster is physically on a single network switch, the threat of a network partition is reduced. But if the cluster is on multiple switches, the risk increases significantly and must be accounted for.

VoltDB provides a mechanism for guaranteeing that a network partition does not accidentally create two separate copies of the database. The feature is called network fault protection.

When network fault protection is enabled, and a fault is detected (either due to a network fault or one or more servers failing), any viable segment of the cluster will perform the following steps: 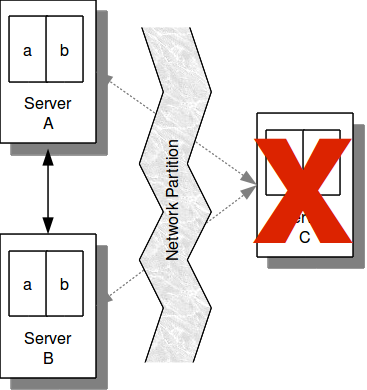 If a network partition creates two viable segments of the same size (for example, if a four node cluster is split into two two-node segments), a special case is invoked where one segment is uniquely chosen to continue, based on the internal numbering of the host nodes. Thereby ensuring that only one viable segment of the partitioned database continues.

Network fault protection is a very valuable tool when running VoltDB clusters in a distributed or uncontrolled environment where network partitions may occur. The one downside is that there is no way to differentiate between network partitions and actual node failures. In the case where network fault protection is turned on and no network partition occurs but a large number of nodes actually fail, the remaining nodes may believe they are the smaller segment. In this case, the remaining nodes will shut themselves down to avoid partitioning.

For example, in the previous case shown in Figure 10.3, “Network Fault Protection in Action”, if rather than a network partition, nodes A and B fail, node C is the only node still running. Although node C is viable and could continue because the database was configured with K-safety set to 2, if fault protection is enabled node C will shut itself down to avoid a partition.

In the worst case, if half the nodes of a cluster fail, the remaining nodes may actually shut themselves down under the special provisions for a network partition that splits a cluster into two equal parts. For example, consider the situation where a two node cluster with a k-safety value of one has network partition detection enabled. If one of the nodes fails (half the cluster), there is only a 50/50 chance the remaining node is the "blessed" node chosen to continue under these conditions. If the remaining node is not the chosen node, it will shut itself down to avoid a conflict, taking the database out of service in the process.